Women’s magazines are one of my biggest pet peeves. I want to read about fashion and makeup: I don’t want leftist politics shoved down my throat. I canceled my subscription to Allure when it became politicized: sad, as I was a charter subscriber.  Likewise, I didn’t re-subscribe to InStyle, as it became politicized under EIC Laura Brown.  Here’s a letter that I sent to InStyle:

When my subscription to InStyle expired, I chose not to re-subscribe. I did not re-subscribe, as the magazine had become politicized under the leadership of Laura Brown; moreover, I do not share her leftist politics.

While I was at the airport, I came across the Bada** Women Issue. First, why do you need to use coarse terms such as Bada**? Secondly, the issue did not feature any conservative women.

Why not Rep. Martha McSally (R, AZ-2)? She is a 2018 Republican candidate seeking election to the U.S. Senate. She became a colonel in the U.S. Air Force. She was the first American woman to fly in combat and the first female commander of a USAF fighter squadron. She successfully challenged military policy that required servicewomen stationed in Saudi Arabia to wear the abaya when they are off base. If that isn’t bada**, I don’t know what is.

Why not Nikki Haley, U.S. Ambassador to the UN? Why not any of the numerous outspoken conservative female commentators (Dana Loesch, Michelle Malkin, Laura Ingraham, among others)?

I subscribed to InStyle for fashion, beauty, and style. I do not want to have Laura Brown’s leftist politics shoved down my throat.

If women’s magazines won’t feature conservative women, then I will.  I’ve added a widget #Leftist #politics are the latest #fashion to the sidebar that will feature tweets criticizing women’s magazines.

Another letter to InStyle:

END_OF_DOCUMENT_TOKEN_TO_BE_REPLACED

I’m very partial to L.L. Bean‘s French Sailor Shirts, because I like the weight of the cotton. It was disappointing that L.L. Bean no longer sells the notch-collared, short-sleeved top shown below.

The styling was inspired by an & Other Stories ad.   The bandana features hearts in its print: Sweetheart of the Rodeo (which was the title of an album by The Byrds).  Be aware that these items are no longer available.

Below are striped tops with distinct details:

The Lands End shirt features a side knot.  The top from ABLE (lower right) features a drawstring at the hem.  Both are on sale.

Respect would have meant wearing dresses by Indian designers: I have to agree with VOGUE India on this one.  Moreover, it’s fashion diplomacy. Lady Gaga wore a Naeem Khan gown when she was India – and a wig dyed white, orange, and green: the colors of the India flag.

I’m sensitive about cultural appropriation when it comes to India.  It’s shameful that people feel free to trash India and Hinduism while they appropriate yoga and ayurveda for themselves, with little to no credit to the Indian roots.

But expect the collection to sell out within minutes, with pieces being re-sold for exorbitant prices on eBay.

Marimekko’s most popular print is its Unikko poppy print (not featured in its collection for Target).  Dolce & Gabbana ripped it off and even tried to cancel registration of the Unikko print in the EU: to learn more, read D&G Dolce & Gabbana rips off Marimekko Unikko print.  Be sure to read the comments too! 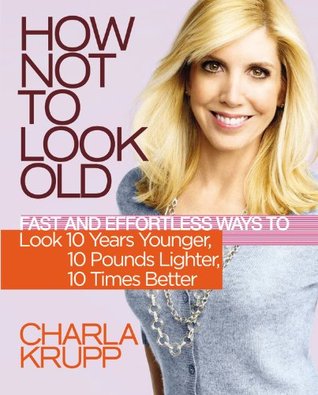 How Not to Look Old: Fast and Effortless Ways to Look 10 Years Younger, 10 Pounds Lighter, 10 Times Better by Charla Krupp

I read How Not to Look Old after reading Andrea Robinson’s Toss the Gloss. Charla Krupp’s book is more extensive, as it covers fashion in addition to make-up.

Charla Krupp begins this book by saying that looking old negatively impacts you both personally and financially. Not a very upbeat way to begin a book.

I disagree with Krupp’s aversion to nude pantyhose: I feel undressed without hosiery. Krupp also advocates shimmery pink gloss (see the back cover), something that Robinson opposes.

Krupp’s best chapter is on bra fitting. Did you know that the band should provide more support than the straps? For more tips about bra fitting, I recommend reading How to properly measure from my favorite lingerie store Trousseau.

Had I not read Kathy Shaidle’s humorous 50 is the New Crappy, I would not have known that Charla Krupp died in 2012 at age 58. She did not get to live to old age.

View all my reviews

Connie Wang had a delightful article on One Editor’s Ode To Ugly Shoes on Refinery 29.  I love summer footwear, and I’ve had my share of “ugly shoes”: Dr Scholls wooden exercise sandals and Earth shoes with the “negative heel.”

In keeping with the nude-colored footwear theme, I bought this pair of NAOT Gallus sandals in linen leather/bone nubuck:

The NAOT Gallus sandal features NAOT’s signature leather- and microfiber-covered cork and natural latex footbed, a 2-3/4″ heel, and a 1-1/4″ platform.  I plan to wear this with my crop pants.

The NAOT Gallus sandals costs $165, and online vendors may be found through Google Shopping.  For those of you who live in the DC metro area, I recommend the JC Comfort Shoes store in Reston for its customer service.

What do you think of the NAOT Gallus sandal?  Do you want more articles about fashion and style on The Style Page blog?

I love Kate Middleton.  Or rather I love (in ascending order):

One thing that I’ve picked up from Kate is the wearing of nude-colored shoes.  How many times have you seen her wear the L.K. Bennett Sledge pump?

Customarily, you’d pair a dark-colored dress with black shoes, but nude-colored shoes elongate the leg.  That’s a good tip that I picked up from Kate (or rather, her stylist); however, I wouldn’t wear a heel as high (4″ with 1/2″ platform) as the L.K. Bennett Sledge Pump.